***In case anyone missed it we have moved to a new location. Some of you may still be finding yourselves here through one old link or another. If you do, head on over to www.thewanderingalchemist.com and see what our new site looks like!***

RPG Blog Carnival: At World's End - Coming To A Close

Hello everyone!  Today I am putting in my two-cents for this months RPG Blog Carnival.  This month is being hosted over at Rising Phoenix Games and concerns the end of the world.  What happens at the end of a years long campaign?  What happens on the brink of apocalypse?  These are some of the questions that can be considered and answered for this month.  I, however, want to talk about the end of the campaign, rather than the end of the world.  It is not always that the world ends in-game or that the heroes have come to the ultimate moment of the campaign.  Sometimes, even after a few years, a campaign comes to an end. 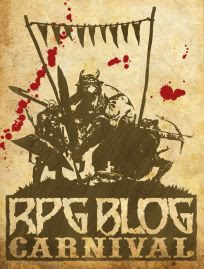 If you are lucky the campaign you play in goes on for months and then years.  You establish yourselves in events within the world and become attached to your characters, NPCs, and locations.  Hours upon hours have been spent in the game, but eventually that ends.  If you are even luckier, when this happens it is because you have succeeded in your ultimate goals.  When that isn't the case though, you can still get lucky.  How?  By knowing that the end is going to come and when.

When this happens, your group has the ability to plan out how you end it.  When this is the case you can all go out with a bang, even if you don't get to kill that god you had hoped to.  Of course such events do not always come at the end of campaigns.  Sometimes a player must leave the campaign and you want to give them a send-off.  While not the end of the world, or the end of a campaign, it is an ending.  As such it is important to make it big, especially after over a year of playing.

We had such a player.  The same one I mentioned in my second-ever blog post.  The one who is a god now.  After 13-14 months of developing the character, creating part of the world mythos, and seeking godhood in baking the player was going to be moving away.  A lot had happened and the adventure was moving into a transition to exploring problems around the countryside to becoming leaders and heroes that would save the world.  Before that they would have to enter an old and desecrated ruin, the vision-appointed spot from which they would have some control over their situation.

That session was for the future of the campaign and the "boss" was more directed at another player, but here's the thing.  It was a boss because epic confrontation was where that player and his character excelled.  Not to mention he tended to be the tank.  In the end it was a great choice as he landed the killing blow and we were able to create a narrative event that gave the character power and sent him on the next leg of his journey to godhood.  We got to send the PC and the player off from the campaign in an amazing way.

If you ever find yourself presented with an ending, take hold of it as early as possible and make it the best ending you can.  Whether it is a character, a story arc, a whole campaign.  Whether it was supposed to end there or not.  Whether you meant to end things there or not.  Make every ending (or potential ending) yours.

In some cases ending are abrupt.  Suddenly something happens and the campaign can't be played anymore.  Or maybe it is slow and subtle.  The end of a campaign slowly taking old, session by session, until you just don't play anymore.  I have been a part of both endings.  Sometimes you start something and you have grand plans, but other games or other parts of life take precedent and that campaign disappears.  Other times one thing cancels a session.  Then another.  Then the first thing again.  Then someone has to move.  You all want to start back up as soon as everything settles, but that is always harder than you expect.  Often restarting regular games never happens and the campaign just trails away into the fog of the past.

When these things happen, you have little control and virtually no conscious knowledge of the ending.  You may look back and realize it was going to happen, but that doesn't help you create a send-off.  These are things we have to accept about gaming (life in general), but we may love the characters and world we played in a created.  So, just because a game ends does not mean it has to be over.

You can always revisit that world and reboot the campaign.  Not all endings need be permanent.  That campaign with our god-friend?  We haven't played that in many months now, for a great many reasons.  Including this blog and our podcast, but it is certainly not over forever.  We played for 2 years and there were many plans for that campaign.  From me as DM and from the players and their characters.  And those plans sit in my mind, a large folder, and some digital files.  Just waiting for a time to come back to.

So how do you bring back a campaign that ended?  Especially if you managed the epic send-off I talked about earlier?  First of all, do nothing to diminish that send-off.  Make sure it is a integral part of the start of this new campaign.  If the PCs died back then, make it important.  If they succeeded, make that victory important.  Second, set it in the future.  Whether its a couple months or a couple years, set it after the area / world has adjusted to whatever happened.  If there was no awesome send off, work with the players from that old game and decide what happened in the interim.

From here you can move forward again towards the end goals of the last campaign.  Or, maybe there are new ending on the horizon.  Either way you can move forward from a fresh start while still being based on years of role-playing.  I have said this a number of ways, but I think the best way to put it is a good way to end this article:

Just because there is an ending does not mean the story is over.
Posted by Unknown at 11:22 AM